I would cry when looking at myself in the mirror 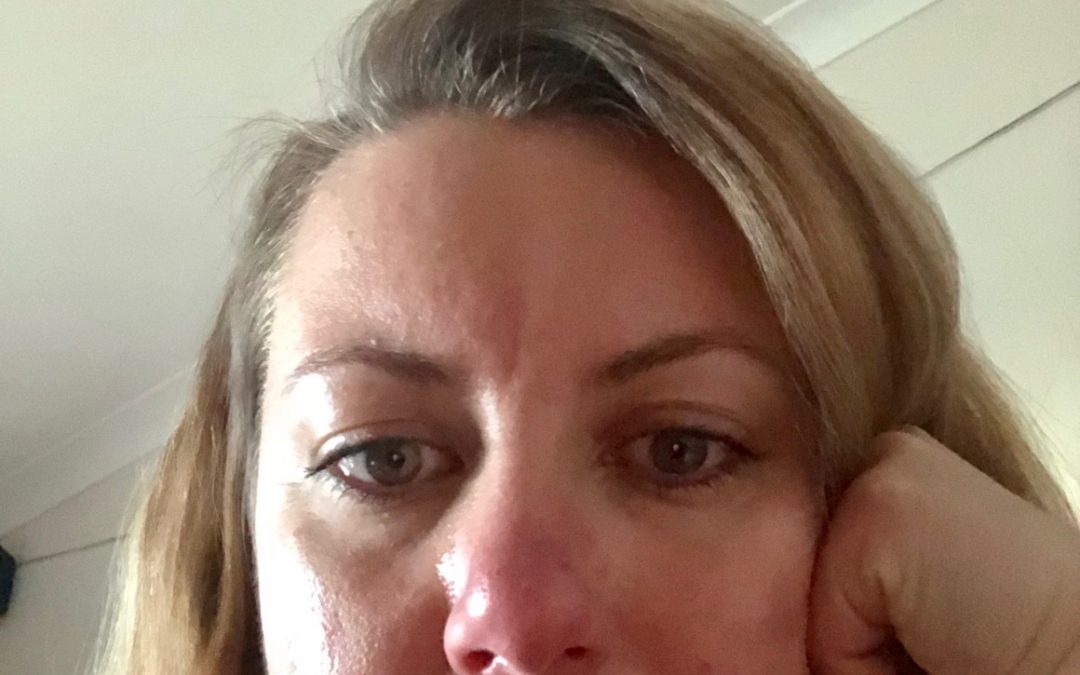 It’s hard to tell when rosacea began for me. I have always flushed pink when nervous or embarrassed. I used to get those rosey cheeks when it was cold out. Having an English mother it was often put down to having that English rose skin. Writing this and looking back at the photos has been hard. There have been a few tears shed. Having the confidence to open up and share this and the photos has taken some getting to. I always knew I would share this one day, seems as though today is that day.

Looking back there were definite signs rosacea was on it’s way. I did notice that I got really red after working out. I do remember thinking at the time that it did seem extreme compared to the how exhausted I felt. But you don’t really pay any attention to it. I did just put it down to that was the way my skin was. Certainly made it look like I had just worked super hard… Only now I know this is one of the signs of rosacea.

Another sign that went unnoticed. Well actually not unnoticed because quite frankly you couldn’t not notice it… That was the chalazion’s I developed. These are hard fatty lumps that form on your eyelids. It was not until I was studying that I realised these were actually linked to rosacea. Sometimes they will resolve themselves, other times you need to have them removed. I had to have mine removed.

When the first signs of the rosacea appeared I didn’t even realise what it was. I have always struggled with my hormones and as such my skin has never been great. So when small red patches began to appear, I just assumed that this was another outbreak. They would come and go and often have the pustules on them.

Now pustules in rosacea are different from your regular hormonal pimples. I’m sure most of us can remember those from when we were a teen. Without being too graphic, the pus from those was quick thick. When you have rosacea the pustules are filled with a clear liquid. This is something that again you can look back with hindsight and be like… oh yeah.

Those first patches on my cheeks appeared around the beginning of 2014. Wow just writing that really makes it hit home how long I have been dealing with this. They say rosacea is a chronic condition and is likely to be something you always battle with. To think it has been over 6 years for me now this could very well be the case. I think I may always have flare ups but I am certainly not going to let that stop me from trying to ‘beat it’.

The situation was getting worse

It didn’t really begin to take hold until mid 2015. Around this time my health in general started to decline. I was putting on weight and it didn’t matter what I ate or how much I exercised nothing was working. Then came the hormonal and gut issues. I went off hormonal contraceptives. I was on these to help control endometriosis and did think maybe that would help my weight. I did put the skin stuff down to the change in hormones. But the redness and ‘pimples’ never went away. In fact my skin got progressively worse. I started to react to a lot of food I was eating. Even the ‘healthy food’ was beginning to be a problem. Here is a blog I wrote around that time regarding my gut health “When your bacteria count is low”.

During all this it’s not like you could see I was unwell in the traditional sense of the word. Yes my skin was showing it. I was feeling horrible within myself. But I was still fully functioning. I was showing up for work, putting in 50+ hour work weeks. I was still exercising. I was moving more towards a healthy eating and even started a Nutrition and Health Coaching course. As my health was declining I wanted to know all the information I could to help myself get better.

Nothing was working. I would feel better for a couple of weeks, I would think my skin was clearing then I would relapse. I cannot tell you how devastating that was. I consider myself to be a resilient person. I can deal with a lot and still keep coming back. But I can tell you during 2016 I was not in a good place. Not that others would have been able to tell. Those close to me would have seen the cracks but not the outside world.

When you can’t even look at yourself in the mirror…

To say it affected my self esteem would have been an understatement. Sure I could reduce a little of the redness, not make it look so angry – and that is exactly what it looked liked – red and angry. Then there was the lumps and the pustules. Being single during this time was hard. How would anyone see past the every obvious and in your face redness staring at them…? I didn’t like photos being taken. I was self conscious and I didn’t like it. I’m a social and bubbly person, this was taking away that part of me. I would cry after looking at myself in the mirror, in photos. There was no way you could see the person behind this red angry skin that was blazing out. I felt defeated.

Whilst I have tried not to let it, the rosacea has impacted a lot of my life. One very poignant moment was when I had to be bridesmaid for my brother. I would have done anything not to have had to have people looking at me that day, to not have had those photos taken. Because even with the makeup on I felt horrible. There were a lot of tears. Without my mum getting through some of those dark days I’m not sure how I would have come out the other side. All I wanted to do was fade into the background. That was how I had started to feel. Like I just wanted to fade away from life. Even writing this has made me feel quite emotional.

Like I said earlier, I am a resilient person but when what you’re fighting against is looking back at you each day, it’s hard to keep that fighting spirit. Those words ‘what I was fighting against’ those were exactly how I was feeling. Not just with the rosacea but with my health, both physical and mental, in general. I felt like it was me against my body and my mind. And I was loosing the battle.

I was at a Wellness Summit and heard the gorgeous Kim Morrison speak on body love. I don’t think I have ever loved my body. Actually as far back as being a kid I have had negative thoughts towards it. It was listening to her speak that the message really hit home. My body wasn’t fighting me. It was trying to tell me something. It was pretty clear I wasn’t listening. That disconnect me vs body I can now see was a major part of the problem. Even in that moment when I had the realisation that we weren’t seperate, it still took me a couple of years to fully understand and respect that relationship. I still don’t have it nailed but I am so much better at listening to my body whisper so it doesn’t have to scream… 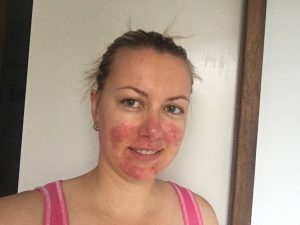 Was there some hope?

The nutritionist I was working with at the time suggested I do a SIBO test. Small Intestinal Bacteria Overgrowth test. This is where the bacteria you have in your large intestine begins to make it into your small intestine. It can even come down from the bacteria of your mouth if your stomach acid is not robust enough to kill it.

Well it came back positive. Since studying SIBO in greater depth I probably didn’t need to take the test, I would say it would have been pretty obvious that I had it due to my symptoms but also the underlying causes.

Now not everyone who has SIBO has rosacea. And not all rosacea patients who have SIBO and clear it get rid of their rosacea but I was sure as hell going to give it a try. We decided I would give the GAPS diet a go. This would also heal the damage that had been done to my gut. Now as far as therapeutic diets go, this is pretty hectic. But I did it. And I did see a little relief. But like everything else this didn’t stay.

After studying a Bachelors degree in Health Science and doing further study into SIBO and rosacea it’s easy to see why I kept relapsing. I was not addressing the underlying causes of my SIBO and I wasn’t getting really honest with the triggers of my rosacea.

So here I am currently 6 weeks into my second round of treatment for SIBO. The first one wasn’t successful because of the reasons above and I moved across the world in the middle of it…

One bonus of social distancing and isolation time is there isn’t too much to tempt you which allows me to stick to the diet. The downside is I know my body is very sensitive to sitting for long periods. And I’m doing a lot of that at the moment. I don’t think people give enough credit to the health of their spine. All the messages to our body are sent through our spine so when it’s a little unhappy so those messages aren’t as on point as they should be. This I can see is getting to be a little bit of an issue for me. But one I am trying to combat. Currently I am sitting here, typing this out with an alarm set for 50 minutes at which point I will get up and move about. Let’s hope that is enough to keep my body happy.

I have started to see improvements in my rosacea. There are patches of ‘normal’ coloured skin appearing on my cheeks. The areas of thickening on my cheeks do feel like they are becoming more normalised again. The papules (red bumps) have all but gone. My nose which had become all red is now showing signs of ‘normal’ coloured skin too. I am hesitant to say this is working. Like many times before I have had small successes only to be disappointed a few weeks later.

For the first time in a long time though I don’t look in the mirror and feel down about what is staring back at me. 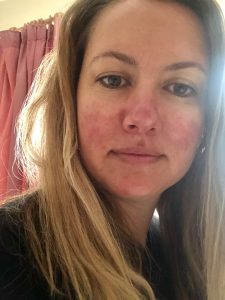 Today no make up

Today with make up